Pat Barker on World War I

Pat Barker is a British writer whose trilogy of novels examines World War I. The first book in the trilogy, Regeneration, was short-listed for the Booker Prize and chosen by The New York Times as one of the four best novels of 1992. The second book, The Eye in the Door, won The Guardian Fiction Prize and the third book, The Ghost Road won the 1995 Booker Prize.

Regeneration is a masterful blending of fiction and non fiction. It is set mainly in Craiglockhart Hospital in Edinburgh, where soldiers were sent to recover from the effects of nerve gas and other psychological traumas resulting from ‘shell shock’. The characters are based on actual people. The book starts when the poet Siegfried Sassoon published his declaration in July 1917, stating his belief that the war was being prolonged deliberately as a weapon of aggression and conquest, rather than the original intent (or that which the fighting soldiers understood) as a means of defence and liberation. We are taken into the hospital and get some insight into the horrors of the mental illnesses that beset these soldiers – some idea of what they had witnessed and lived with in the trenches. Most of the story is told from the viewpoint of the progressive Dr Rivers who, unusual for the time, empathises with his patients. Around him, treatments almost as horrific as the war experience are practised, particularly  by Dr Yealland who locked his patients in a room for hours and subjected them to high voltage electric ‘therapy’. Sassoon meets Wilfred Owen and advises him on some of his poetry – they discuss Anthem for Doomed Youth – and, although it is not covered in this story, Owen was ‘doomed’ and killed just before the end of the war. The book has been researched thoroughly – at the end, reference is made to papers written by Rivers and (separately) Yealland, whose methods seem to be a nineteenth century view imposed upon early twentieth century equipment. Once more, the utter horror of that war lives on. 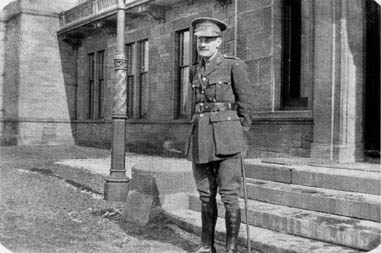 The Eye in the Door is the second part of the trilogy. Again, the empathic psychiatrist W. Rivers is central, but in this book he is a little less centre stage. And again, most of the characters are based on real people. Fiction enables Barker to make these people more alive than they might have been in an accurate historical account. We can get closer to them – we can know what they are thinking and we can almost live their horrific experiences of being at the front: holding an eye that had belonged to an injured companion, shooting a dearly-loved comrade because there was no way he could be pulled out of treacherous mud. One main interest in this book is the fugue state, whereby a sufferer has long periods of amnesia during which, it seems to others, he is quite lucid. A second interest is the contemporary campaign against homosexual men – ‘sodomites’. It’s all terribly early 20th century British, which is a great strength, and we see some of the life of the working class, often not documented in the literature about that time.

The novel takes place during 1918 and finishes before the war ends. Indeed, Britain is in a bad way. The main character is Billy Prior, who works in Intelligence and suffers from fugue states. Rivers is his doctor – and we see how Rivers respects Prior’s intellect and is deeply interested in Prior the person, as he is in his other patients, notably Siegfried Sassoon. Rivers himself seems to be torn between pacifism and patriotism – he is ‘curing’ these men so that they can go back to the manslaughter of the front. Rivers suggests that a state where a person has dual personalities is quite natural – the face put on to carry out duty versus the compassionate human being.

The eye in the door is, literally, an eye on a prison door, which Prior sees when he visits an inmate. That probing eye watches even when the prisoner defecates. And, for me, the ‘eye’ was more generally applicable, suggesting constant scrutiny of clandestine activities.

One character who makes a brief appearance is Winston Churchill. I did feel that Pat Barker must have come across this information and enjoyed finding a way to use it. Churchill, with Edward Marsh (a poet and civil servant known to ‘have sympathies’ with the homosexual community) spent an entire afternoon beating each other’s buttocks with plaited birch. Hmm – was Churchill gay?

This book shows graphically the horror of World War I. No matter how much one reads, how many pictures one sees, it was a hideous and brutal experience that is almost beyond imagination. The Eye in the Door, through fiction, manages to tell us things that maybe the participants, in that still rather laced up British society, might not have dared to say.

I look forward to reading The Ghost Road, the third book of the trilogy.

3 Comments to “Pat Barker on World War I”