G.F. Handel composed many operas as well as oratorios.  Saul was composed as an oratorio at a time when opera was a little out of favour in London. An oratorio is a large-scale, usually narrative musical work for orchestra and voices, typically on a sacred theme, performed without costume, scenery, or action. Handel’s oratorio of Saul was first performed in 1739. It is a dramatic telling of the consequences of David’s victory over Goliath. Saul, king of Israel, is jealous of David’s success and plots to have him killed but Saul, unhinged by jealousy, and his sons are killed in battle and David ends up as a popular leader of the Israelites. Handel’s work is normally sung in concert style with choir, orchestra and soloists. In Handel’s time it was conducted from the harpsichord. This drama has been taken by Barrie Kosky and retold as an opera – the music and words seem to be unchanged, but the spectacle is magnificent. Pretty much the first thing we see on stage is the severed head of Goliath, then the curtain swings open to a vibrant banquet that for some reason reminded me of a Rubens painting – although the participants were clothed – the choir, actually on the tables that are overflowing with flowers, food (venison and swans) and the people themselves.

No staid chorus here, the colourfully dressed singers jumped off the tables and danced. The story has what are perhaps usual ingredients: victory, jealousy, triumph and happy young lovers (David ends up with Saul’s daughter). The music was interpreted in a light buoyant style using a full orchestra, but with none of the heavy stodginess that is sometimes the fate of baroque performance. As in Handel’s day, the conductor led from a claviorganum – a replica of an instrument used at the time. In the second part this instrument rose from centre stage, briefly reminiscent of old theatre organs. There were stark contrasts enhanced by the costume and scenery which, when jubilant was strikingly bright and colourful and when troubled, was stark black and white. The second part began stunningly with a stage covered by lit candles – for a while that was all you could see.

The leading men stood out in their black present-day style suits. When mad, Saul, who suckled the sagging breasts of a hermaphroditic witch to evoke the ghost of Samuel, was totally white. In the final scenes everyone was dressed in black and white. 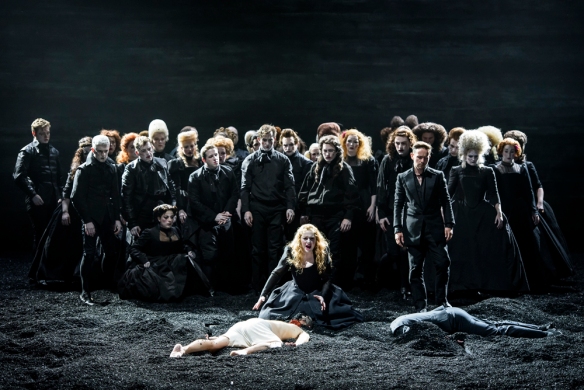 One is tempted to say that in its presentation as an opera Saul came alive. But of course a traditionalist would say that the great music of Handel is alive anyway and doesn’t need enhancing. The music was totally respected. The Biblical story was interpreted in a way that would not be condoned by puritans. While, on the one hand, this production was completely faithful to the original, I nevertheless came away feeling that I had had a new, stupendous Felliniesque experience.

‘The Secret River’ in a quarry

The Secret River by Kate Grenville has been adapted for stage by Andrew Bovell and performed at Anstey Hill Quarry, Tea Tree Gully, South Australia

This adaptation of Kate Grenville’s novel took place at night in a dusty quarry, in Kaurna land on the outskirts of Adelaide, set up for outdoor theatre, holding an audience of about 1000.

The fact that many of us were uncomfortably cold added to the atmosphere of early European settlement on the Hawkesbury River. The director, Neil Armfield, points out that the story is set at a time when ‘those who came might have listened and learnt from those who were here, might have found a way of living here on this land with respect and humility’.  .  . but ‘a terrible choice was made’. In Kate Grenville’s story we witness this terrible choice being played out: arrogant assumption of ownership and, whereas the indigenous people manage to call the Europeans by their English name, the Thornhills find the Aboriginal names too difficult: ‘I’ll call you Jack . . .’.  The youngest son plays with the Aboriginal children and much later disowns his father when he finds out his role in the ultimate massacre.

Grenville herself says that this play is ‘far more than an adaptation – it is an astonishing feat of creative re-imagining.’ One of the most powerful dimensions added by putting this story on stage is that, whereas in the book we can see the indigenous Dharug people just from the European settlers’ viewpoint, on stage we see how the Thornhills were confronted because those indigenous people must talk and we can’t understand them. Grenville, as a white person, rightly in my view, couldn’t cross the line of empathizing with these people by putting words in their mouths. But as the playwright, Andrew Bovell says, ‘we simply couldn’t have silent black actors on stage being described from a distance’. It was fortuitous that one of these actors knew the Dharug language – the language of the Hawkesbury River people. Dharug actors were given Dharug names and they spoke their lines in the language. So we white people in the audience heard the Dharug people as the Thornhills would have heard them – there were no surtitles – we just had to try to make out what they were saying.

Bovell asks some crucial questions: ‘How do we make sense of what indigenous people thought and felt about the arrival of Europeans . . . Even first hand accounts from the time have been written down and interpreted by Europeans writers.’ In the cool breeze in the quarry, with night sounds around us, we were transported as closely as possible to that time when a different approach to settlement might have been taken, when there might have been some attempt at understanding.