ENSEMBLE FRANÇAIX AND THE HARP

Earlier this year I wrote about the enterprising work of Ensemble Franҫaix, a trio of Oboe (Emmanuel Cassimatis), Bassoon (Matthew Kneale) and Piano (Nicholas Young). They have now returned from a successful time at the Osaka Chamber Music Competition and on Friday 21st July were joined by guest artist Natalie Wong, harp to present a lunch-time concert at the South Melbourne Town Hall.

That week, Emmanuel had a bike accident leaving the outward evidence of a black eye, but he must have been very much shaken by the experience – others might well pull out of a challenging concert in the same week. Apart from playing only one movement of the opening piece, the Poulenc trio, he played the program as though he were under no difficulties at all. 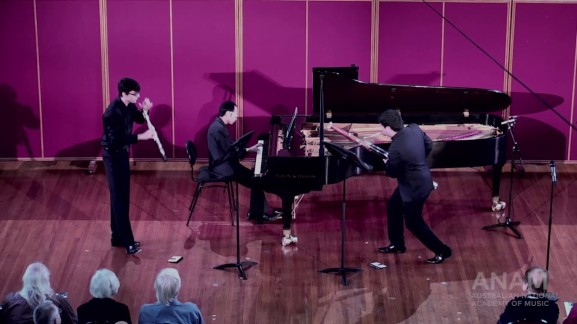 One of the many commendable things about this group is that, although they are young and relatively new to the music scene, they commission works.  In this program we heard Silk Road, by local composer and brilliant pianist, Peter de Jager and a piece by Natalie Wong, I recount I construe. For both of these pieces the trio was joined by Wong on harp. I was entranced by the way de Jager combined harp and piano – a prepared piano giving an oriental flavour to the whole, which, for me, was a seamless melding of east and west. Natalie’s piece was at times lyrical and at times playful – to the extent of briefly having Emmanuel and Matthew play on just their double reeds.

The concert finished with Mondrian Interiors, by local composer Stuart Greenbaum, who was in the audience. The Ensemble was joined by clarinet and horn. Each of the eight movements depicts, or was inspired, by paintings of Mondrian that the composer saw at an exhibition in London in 1997. The piece was composed ten years later. The images were projected as each movement was played.

I look forward very much to further concerts by Ensemble Franҫaix. To support them in their commissioning of new works, go to their website:  http://www.ensemblefrancaix.com/