Brian Aldiss: When the Feast is Finished 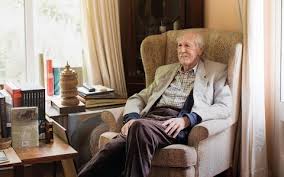 When the Feast is Finished is Brian’s moving account of the death of his wife, Margaret, from Pancreatic cancer, in 1997.

‘When the feast is finished’ comes from a poem, unknown to me, by Ernest Dowson, expressing finality. What I found more touching, was Aldiss’s quotation in this book of the poem by William Blake:

That flies in the night,

In the howling storm,

Has found out thy bed

And his dark secret love

Does thy life destroy.

What a poignant description of a beautiful, loved person being taken by cancer.

The book is based on journals, kept by both Brian and Margaret, over the all-too-short weeks of her illness. The reader becomes a part of their daily lives as they eat their chicken pies or Marmite sandwiches and Brian learns how to do the shopping and work the washing machine. This is what dying of cancer is: watching other people’s reactions, holding out what he knows is irrational – but desperately hoping – even for a science fiction writing atheist – that a miracle will occur and Margaret will be spared. At first Brian hopes that Margaret will be cured, then the wish is diminished – just that she will continue to be there, even in her damaged semi-bedridden state. And a part of this irrationality is that no expense will be spared to make the final days of the dying one as bearable as possible – a lift is installed although it will be used only a few times. Margaret has a week in palliative care; she deteriorates terribly.  At first, when he leaves, Brian taps on her window with his car keys and she responds by turning her light on and off, but within days the time comes when he knows there is no point tapping the window. Nevertheless, he knows that Margaret would like to go home – so, for her last few hours, she is brought home by ambulance, with special nurses.

As I read the book, at first I thought that there was too much; much more than the reader needs. Were all these details included as a therapeutic exercise for Brian? No.  Having been through a somewhat similar experience myself, I know that you feel that by recording every detail you are clinging on to a part of that person. The daily routine: new doors being installed, a new car (Margaret’s gift to Brian), an inventory of Margaret’s jewellery, its value, and to whom it is to be bequeathed, takes us right there – there to the practical side to dying. We are with them.

‘“One more breath, my darling!” I begged. She delivered it. Her breaths became few and slight. Far between. I held her gently. She ceased to breathe. It was about 3.55.’

Filed Under: My Reading

2 Comments to “Brian Aldiss: When the Feast is Finished”