Yesterday I went to a movie that I hadn’t seen since I was 4 years old: Walt Disney’s Fantasia, made in 1940, an innovative and extremely expensive venture (particularly given that it was just before the US entry into World War II) made in collaboration with renowned conductor Leopold Stokowski and the Philadelphia Orchestra. Stokowski was so keen on the project that he gave his services free of charge. I expected to loathe the film – someone else’s idea of visual representations of sound. I went because the movie was being shown at my local cinema, the appropriately Art Deco Astor, and I wanted to test my memory – I had vivid recollections of scenes from the Nutcracker Suite. 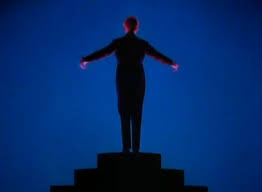 Disney’s was a novel idea – to illustrate music, in some cases without a story line. The film comprises eight presentations, each introduced by a master of ceremonies. At the beginning and at ‘interval’ we see and hear the orchestra tuning up and, at interval, jamming. Leopold Stokowski stands on a podium with fabulous lighting of various hues. This was the first commercial film with stereophonic sound. The restored film was digitally projected. It didn’t seem to be 78 years old. 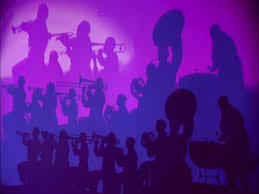 Segment 1 is Bach’s Toccata and Fugue in D minor. Composed for organ, it had been orchestrated. To my amazement this was possibly the segment I liked best. Firstly, I usually don’t like music played by orchestra when it has been composed for some other instrumentation (in this case the organ). And secondly, as suggested above, I prefer not to have my own thoughts disrupted by someone else’s visual interpretation. But the visuals for this piece were amazing. Starting with an outline of orchestral players, the images became abstract, but related to the actual sounds being made. And the fugue part, using colour, depicted the blending of the various lines of music – very accurately, it seemed. I wished afterwards that I had thought to use this when I was a classroom music teacher. 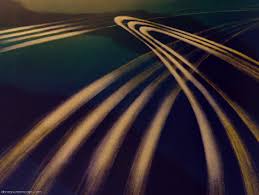 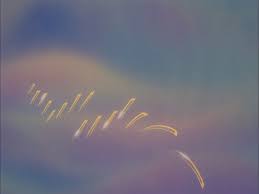 Segment 2, Tchaikovsky’s Nutcracker Suite. This is a suite from the ballet, developed for the concert hall. It was the main memory from my 4 year-old viewing – the ballet segments appeal to a little girl: the sugar plum fairy scatters her mist over flowers and wakes them up, little Chinese people are depicted as red-hatted mushrooms, for some reason the Russian dance is performed by characters that look like Scotch thistles and the Arabian Dance is an underwater ballet – beautiful except cartoon fish always seem to have long eyelashes! I don’t know why this is underwater – racial reasons? Some black centaurs that were in Segment 5 were deleted many years ago because they were shown performing demeaning tasks. 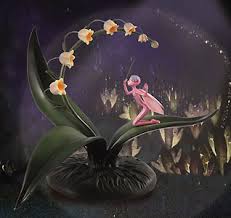 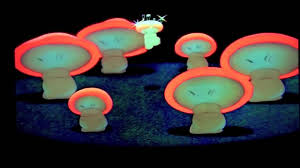 Segment 3 is perhaps the best known: the Sorcerer’s Apprentice by Dukas. This was the catalyst for the whole project. Disney was making a film of this story and it was proving too expensive – the short film wouldn’t make enough money to recoup expenses, so the canny Disney decided to incorporate it in something bigger. I think this segment is quite often shown as an example of Disney’s animation. I’m sure I have seen it many times since I was 4. 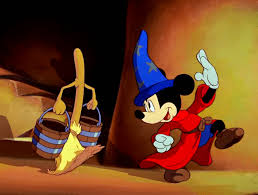 Segment 4 is Stravinsky’s Rite of Spring. I am fascinated that it was included in this ‘family’ movie only 25 years after its riotous first performance in Paris. The ballet is intended to depict pictures of ‘pagan Russia’ in celebration of the advent of spring. This includes circles of stamping dancers and a young girl is sacrificed by dancing herself to death. At the first performance there was derisive laughter and those members of the audience who stayed drowned out the music with their shouting and thumping. Disney used the music to describe the formation of the planet, volcanic eruptions, floods, earthquakes, the emergence of primitive water creatures and dinosaurs who ultimately succumb to drought. We do not know exactly how homo sapiens developed and the mystery is respected. The story, whilst different from Stravinsky’s intention, fits appropriately with the ‘primitive’ theme expressed in the music. 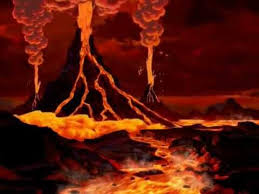 Segment 5 is Beethoven’s 6th ‘Pastoral’ Symphony. Beethoven had a ‘program’ in mind when he wrote this symphony, the full title of which is: Pastoral Symphony: Recollections of Country Life and this is described in the headings of each movement, translated as: Awakening of cheerful feelings on arriving in the country (this would be the countryside around Vienna), Scene by the brook, Merry gathering of country folk, Thunderstorm and Thankful feelings after the storm. Disney’s countryside is in a mythical Greco-Roman world of centaurs flirting with ‘centaurettes’, cupids and fauns. To some extent Beethoven’s program is followed – the merry gathering is Bacchanalian, there is a storm, everything settles peacefully after the storm. It reminded me rather of Bambi and I found it hard to reconcile this interpretation with the music I know so well.

Segment 6 is Ponchielli’s Dance of the Hours. By this stage I was a bit sick of laughing at fat hippopotamus-like creatures and flirtatious ostriches (the film runs for a bit over 2 hours). 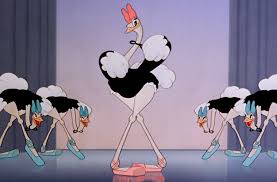 Segment 7 is Mussorgsky’s Night on Bald Mountain. A terrifying devil summons a dance of evil spirits, and restless souls arise from their graves – white pliable skeletons. Ultimately the angelus sounds and everything is calmed – but when I was four, I am told, I screamed so much at the sight of the devil that Mum had to take me out. 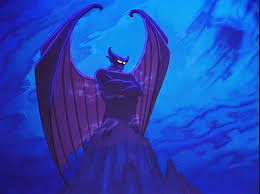 Segment 8: everything is at peace with Schubert’s Ave Maria. 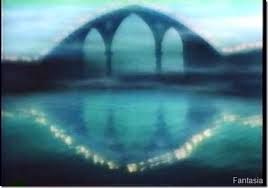 I enjoyed seeing this movie far more than I expected. I wondered whether the last two movements were intended to reflect the war raging in Europe at the time and hope for a world of peace – probably not.

Even when some of the Disney characters seem incongruous cavorting around to Beethoven, the animation follows the music with almost pedantic accuracy. Fantasia is well worth seeing.