Gough Whitlam spoke in BbMajor – so I learned today at the Ukaria Cultural Centre in the Adelaide Hills where I was attending an Adelaide Festival event, Stalin’s Piano. The music/ creation is a collaboration between composer Robert Davidson and pianist Sonya Lifschitz. A compilation of ‘stories’ or impressions of artists who have informed public policy, politicians who have been involved in artistic projects, artists subjugated to political agendas and politicians who see themselves as artists ‘modelling’ populations as though they are clay. Robert Davidson said that hearing political speeches as music assists him in hearing meanings beyond the words – a deeper emotional communication: find the music in the speech and let the piano provide a frame in which to place the music. 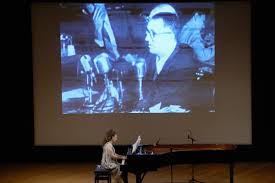 Brecht as shown in Stalin’s Piano

In this 1 hour concert, Sonya Lifschitz played piano and occasionally read as film was projected to draw our attention to the speech of nineteen political and artistic leaders. These ranged through Brecht, le Corbusier, Frank Lloyd Wright (whose speech was very dry and percussive) through Joseph Goebbels, Percy Grainger (who said that music is derived from screaming), Jackson Pollack, the inevitable Donald Trump, ending with Julia Gillard whose voice and phrasing, I discovered, is far more musical than I’d realised. One of the most moving parts of the performance was when we were reminded of Stalin’s treatment of Shostakovich; in spite of threatening the composer and stifling his voice – banning many of his works – Stalin’s favourite pianist, Maria Yudina, refused to follow the party line and continued to go to church. His favourite piano concerto is said to be Mozart’s 23rd. When Stalin heard this piece on the radio played by Maria he requested the recording, but a recording had not been made that evening, so orchestra and pianist were assembled again to produce what the feared leader demanded. (If you have seen the movie The Death of Stalin, you will be familiar with this.) It is said that when Stalin died he was listening to this recording. In a section of Stalin’s Piano, Sonya Lifschitz played along with some of that old recording made by Maria Yudina. The present-day and 1953 pianos were remarkably in tune, I thought, but the fact that they were slightly out set the audience on edge, appropriately.