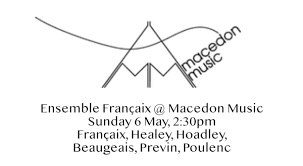 I have written recently about the beautiful setting for chamber music provided by the Murdochs at Lowland Farm, Mount Macedon. Sixty or so people sit in a living room looking out of large windows to autumnal colourings in the near distance and then, further away, rolling hills of Australian bush.

I have also written of the wonderful combination of double reeds (oboe and bassoon) and piano that is the chamber group Ensemble Franҫaix. What bliss to combine the two in the Macedon Music concert last Sunday.

Three pieces in the Ensemble Franҫaix repertoire have become old favourites for me: the Trio by Jean Franҫaix, which started this concert and then later the Trio by Francis Poulenc and the final piece, the excitingly jazzy Trio by André Previn. For descriptions of these pieces, please see earlier entries that describe Ensemble Franҫaix concerts. https://jenniferbryce.net/2017/04/07/ensemble-fran%D2%ABaix/

Ensemble Franҫaix commissions works for their somewhat unusual combination. Last Sunday we heard a Ricercare by Queensland composer Chris Healey. Indeed, it was a world premiere. ‘Ricecare’ is a term usually associated with baroque music – music of a contrapuntal style that often weaves around a theme, teasing it sometimes, then ultimately establishing it. For me, one of the best known baroque examples of this device is the theme of Bach’s A Musical Offering. In Chris’s work there were fugue-like passages, but he said he used the idea of ‘ricecare’ as a kind of launching pad. Chris is a relatively new composer who has written for various combinations of instruments and also piano solos. He says he wants to stand on the shoulders of musical greats such as Ravel, Debussy and Stravinsky. 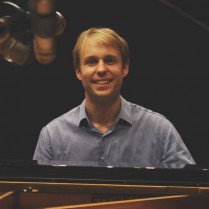 We heard the Australian premiere of Waharoa, by New Zealand composer Ben Hoadley. Ben travels a lot from New Zealand to Australia and the piece was, to some extent, a blending of these cultures. For example, a motif inspired by the New Zealand bellbird, and another, the Australian grey butcher bird. The title of the piece is a New Zealand place in the Waikato region.

Another piece new to me, but not a premiere, was Terra Incognita by Katia Beaugeais. The piece has two movements, the first, ‘misterioso’ depicts the mystery of the ‘unknown’ land that Europeans of the time before the 17th century believed must exist somewhere in the south. 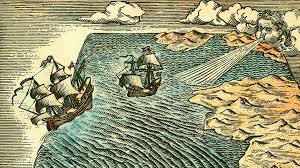 The second movement ‘appassionato’ suggests the land and its native bird life. One interesting device was to have the oboe and bassoon blow into the open grand piano – the open lid deflected the sound in an eerie way. 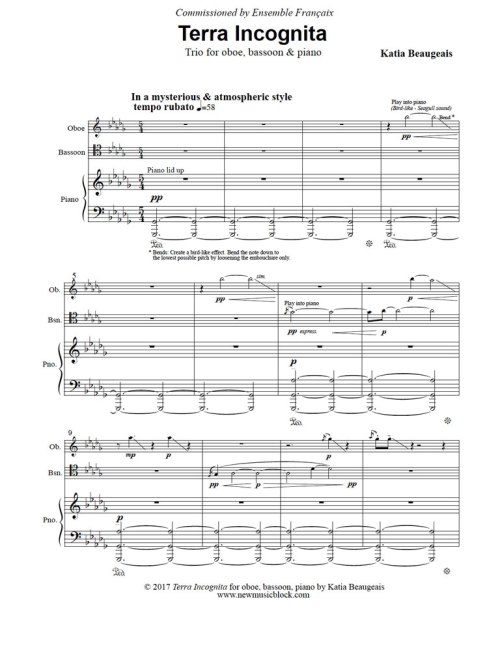 The concert finished with André Previn’s Trio and we went home refreshed by its jaunty final movement.

It is well worth visiting the Ensemble Franҫaix website http://www.ensemblefrancaix.com/ I look forward to hearing many more concerts from this talented group.