At dawn the ridge emerges massed and dun
In the wild purple of the glow’ring sun,
Smouldering through spouts of drifting smoke that shroud
The menacing scarred slope; and, one by one,
Tanks creep and topple forward to the wire.
The barrage roars and lifts. Then, clumsily bowed
With bombs and guns and shovels and battle-gear,
Men jostle and climb to meet the bristling fire.
Lines of grey, muttering faces, masked with fear,
They leave their trenches, going over the top,
While time ticks blank and busy on their wrists,
And hope, with furtive eyes and grappling fists,
Flounders in mud. O Jesus, make it stop! 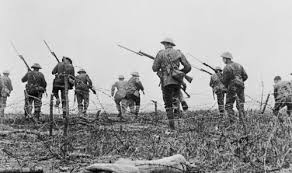 Siegfriend Sassoon’s ‘Sherston Triology’ takes us into the trenches of World War I – particularly France, and a brief experience as an officer in Egypt. It is ‘fictionalised autobiography’ – a three volume account of the life of George Sherston over the war years. These volumes are: Memoirs of a Fox-Hunting Man (the time leading up to the war when Sassoon was a well-to-do young man, fond of fox-hunting, golf and cricket), Memoirs of an Infantry Officer (Sassoon’s experiences as an officer in the trench warfare of France, his wounding and convalescence, during which time he comes to question the continuation of the war), and Sherston’s Progress (the outcomes of his fortuitous meeting with neurologist and psychiatrist W.H.R. Rivers – described elsewhere in reviews of Pat Barker’s books and the effect of this influence).https://jenniferbryce.net/2016/12/15/pat-barker-on-world-war-i/ 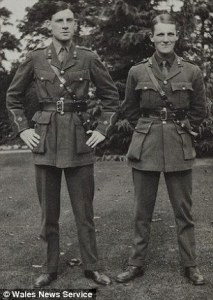 It is believed that the Complete Memoirs of George Sherston accurately outlines the life of Siegfried Sassoon, who was decorated (MC) for bravery on the Western Front. Sassoon said that his alter-ego, George Sherston, personified only about one-fifth of his personality. One large part that is omitted is Sassoon’s homosexuality – understandable as it was illegal in Britain at the time the volumes were published. George Sherston certainly doesn’t make passes at any young ladies and when he is on leave he indulges in sports or solitary pursuits. Sassoon did marry after the war (1933) but the marriage broke down in 1945. There was one son, George, whom Sassoon adored.

Through George Sherston we confront the realities of ‘The Great War’ with the eyes of an officer and a gentleman. There are descriptions of the mud, the long marches and aching feet, the horror of dead bodies – particularly those with whom one was joking a matter of hours earlier. But there is a lot from the officers’ mess; golfing and imbibing vast quantities of the best whisky, leave and rehabilitation on the estate of Lord and Lady Asterisk. And like all good officers, Sherston has a servant.

Sherston is injured and convalesces in England. He comes to see the rift between political machinations and the on-going persistence of insisting that the military continue to fight until there is a victor. In a tremendous act of bravery, Sherston / Sassoon wrote a Statement, which was read to the British House of Commons on July 30th 1917 and published in the London Times the next day:

I am making this statement as an act of wilful defiance of military authority because I believe that the war is being deliberately prolonged by those who have the power to end it. I am a soldier, convinced that I am acting on behalf of soldiers. I believe that the war upon which I entered as a war of defence and liberation has now become a war of aggression and conquest. I believe that the purposes for which I and my fellow soldiers entered upon this war should have been so clearly stated as to have made it impossible to change them and that had this been done the objects which actuated us would now be attainable by negotiation.

I have seen and endured the sufferings of the troops and I can no longer be a party to prolong these sufferings for ends which I believe to be evil and unjust. I am not protesting against the conduct of the war, but against the political errors and insincerities for which the fighting men are being sacrificed.

On behalf of those who are suffering now, I make this protest against the deception which is being practised upon them; also I believe it may help to destroy the callous complacency with which the majority of those at home regard the continuance of agonies which they do not share and which they have not enough imagination to realise.

He was saved from court-martial by the actions of his friend Robert Graves who convinced authorities that Sassoon was suffering from ‘shell-shock’. He was hospitalised at Craiglockhart in Edinburgh and there was a patient of W.H.R. Rivers who seemed to understand his position and indeed helped young Sherston to see his situation from a broader perspective. Sherston willingly returned to active service realising the ironic twist that one could only escape from the war by being in it, thus attempting to avoid his Statement being dismissed as the rantings of a ‘shell-shock victim’. The final words of the book are: ‘it is only from the inmost silences of the heart that we know the world for what it is, and ourselves for what the world has made us’.