Some years ago I read Virginia Duigan’s novel The Biographer, which raises issues about the extent to which it is ethical to reveal personal details in a biography – the tantalising problem that these are often the most fascinating aspects of a person’s life: how far can you go? Richard Flanagan’s First Person demonstrates another, not unrelated, matter: if you ghost-write someone’s autobiography, to what extent might you be taken over by the essence of that person?

First Person is partly memoir, partly autobiography. Some years ago Flanagan did ghost-write the autobiography of conman John Friedrich – and at the time his wife was expecting twins. In the book, a young as yet unsuccessful writer desperately needs money. He has little choice but to accept a job ghost-writing the autobiography of conman Siegfried Heidl, who is about to be jailed for his crimes. Heidl also needs the money he will get from the book but he won’t open up to the young writer, Kif Kehlmann – not one bit. Early on Heidl says, ‘I have been missing since I was born’. For much of the story, Kehlmann and Heidl are confined together in an office of a publishing house in Port Melbourne. Part of the contract is that they must go to work there every day. Kehlmann is utterly frustrated by his inability to get anything of Heidl’s story and Heidl spends most of the time in avoidance behaviour or going out to what are probably fake meetings and lunches. At weekends Kehlmann goes home to his heavily pregnant wife and 3 year-old daughter in Tasmania and is confronted by the pressing need for money.

One of the things that Flanagan does well in this book is to set the brutality of men’s relationships against the harshness of the Australian bush. There is a friend, Ray, who might have provided support to Kif but he is really just a means of demonstrating the bleakness of an alcohol-fuelled mateship. To me, Ray was a rather shallow almost unbelievable character. In backstory we learn that once Kif and Ray tried to cross Bass Strait in a dinghy with the not surprising outcome that they were both almost killed. 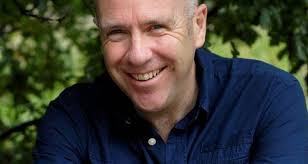 The family in Tasmania is probably intended to be a kind of back-drop – the reason for the desperate need for money. Yet, that’s what kept me reading. Again, not surprisingly, the marriage fails, but Kef has a warmth, tenderness and respect for Suzy: ‘later in the night [he] spooned into Suzy’s back’. For me, the drama was: she’s 8 months pregnant with twins, with threatening pre-eclampsia, they’ve been given a tour of the neonatal intensive care nursery – oh, hell, he’s not going to be there when she goes into labour! And he’s not. He’s not in Melbourne, but home in Tasmania, out drinking after an argument with Suzy. She goes through an horrific labour. Everyone survives. Suzy seems too tolerant, too earth-motherish.

This is all a part of Kef’s transformation into the subject of the autobiography. He becomes more and more like Heidl – lacking principles and morality, rather than the impoverished but genuine writer he might have been. Much later — after Heidl’s death — Kef becomes director of Zero Box Entertainment – far away from ‘shitty’ Tasmania. He travels overseas, has lots of women … There is no going back to the simple home-spun life of a Tasmanian writer.

Heidl dies. It would spoil the story for those who haven’t read it to say how and by whose hand. This is the drama of the book and this is where there is some superb writing; Kef is infused with the harsh bleakness of the bush. Kef and Heidl are both in the bush, near Heidl’s home:

‘And then I was standing above him … Small black ants crisscrossed the red-flecked gruel near his ear… Overhead a black jay was circling.

‘And that’s the worst part.

‘His eyes were moving, following the bird above.

Another stunning piece of drama takes place after Heidl’s death. He has sent the editor some photographs – slides to illustrate the book. Kef and the editor look through the slides together – they are unexceptional – we hear the click of the slide projector. There is blankness, the ‘show’ must have finished, but no, the slide screen ‘seemed to exist only to have shown us this one image’: a flayed human corpse hanging from a tree.