I first heard the remarkable Finnish violinist, Pekka Kuusisto, in 2001 at a Huntington Music Festival – he was then in his early twenties and I remember being amazed by his versatility: dynamism coupled with tenderness. Also at that festival was a young Benjamin Martin – now a leading Australian pianist. As a part of his diverse career as soloist and composer, Pekka is Artistic Director of the ACO Collective – described as the Australian Chamber Orchestra’s ‘regional touring and education ensemble’ of ‘emerging’ professional string players. 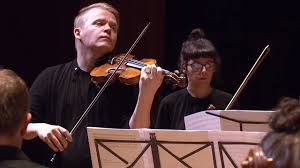 Pekka is a good friend of composer Nico Muhly (who worked as an editor of Philip Glass), and the two came together last December to present a memorable concert.

After a five minute ‘Drone Meditation’, which maybe served as a kind of warm-up, we heard a duet for two violins by Steve Reich, played by Pekka and Harry Ward, which demonstrated the idea of canons ‘drifting out of sync’ while the ACO strings shimmered away in the background. There was then an arrangement for strings of Missy Mazzoli’s You Know Me From Here. Originally a string quartet, the piece depicts a couple’s long-term relationship. After interval we heard Swedish composer Andrea Tarrodi’s Birds of Paradise. The piece depicts the many colours of Birds of Paradise and large sections of the music were bird calls.

There was a world première of Welsh composer Alex Mills’s One is Fun, which was described in the program notes as ‘a constant state of intrigued stress’ – a push and pull effect created by the two violin soloists (Pekka, and Liisa Pallandi). The final programmed piece was another world première of Nico Muhly’s, Shrink: Concerto for Violin and Strings, which had been commissioned by the ACO and Melbourne Recital Centre. As the composer tells us, each of the three movements ‘obsesses’ over certain intervals – ninths in the first movement, sixths in the second and in the final movement ‘a tiny set of anxious intervals between unisons and fourths’. He describes the unisons as ‘coming in and out of focus’.

Nico Muhly in his studio

This was indeed a mind-blowing concert. But it didn’t end with the final programmed item. The concert program invited audience members to ‘please get a drink and join us back… for Breaking Ground, a special duo set that will include improvisation and Finnish folk songs’. What generosity! After their demanding concert program, Nico Muhly played piano and, as well as improvising on his violin, Pekka, at times, sang and whistled. One could sense the pure joy of music-making shared by these two extremely talented musicians.