A requiem is a mass for the dead, for repose of the soul. Mozart’s Requiem in D minor was written at the very end of his life, in fact, he did not live to finish it.  One version was completed by his pupil, Franz Xavier Süssmayr.  This extended version was used, along with additions to what is described in the program as a ‘musical montage’ performed at the 2020 Adelaide Festival by the Adelaide Festival Chorus, the Adelaide Symphony Orchestra, dancers from Australian Dance Theatre and soloists Siobhan Stagg, Sara Mingardo, Martin Mitterrutzner, David Greco and boy treble, Luca Shin — there was also a baby, just a few months old — I hope he/ she received actors’ equity rates! The production was directed by Romeo Castellucci and conducted by Rory Macdonald.

What can a Requiem mean for us in 2020? What kind of repose might we seek, as we face a world that is being destroyed by our own negligence, with governments more interested in narrow self interest than confronting the reality of climate change, with the likelihood that a virus will wreak havoc in populations across the globe? 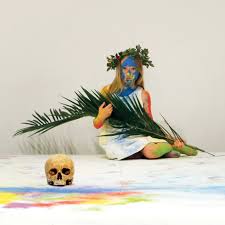 This production of Mozart’s Requiem was certainly oriented towards a 21st century world. I was sitting too far back to see some of the detail that occurred on stage. Indeed, I’m not sure that anyone in the audience would have been able to see, for example, that the person who is going to bed while introductory Gregorian plainchant is sung, is watching TV news headlines about the recent devastating bushfires. Expecting something to do with the crucifixion, I thought that the figure was some kind of modern-day Christ and that the bed from which he/ she ultimately disappeared represented a version of a crucifix. No — I was reading too much into an elderly woman getting into bed and dying.

Some of the dance sequences reminded me of pagan sacrifice (the Rite of Spring flashed through my mind) — the movements did fit to Mozart’s music, and to their great credit, the chorus sang superbly while performing folk dance-type movements and sometimes lying prostrate.

The idea of a 21st century requiem was captured best for me by  the projection onto the back wall, throughout much of the production, of an ‘Atlas of Great Extinctions’.  We were reminded of so many things that no longer exist: the names of flora, animal species, human species, languages, buildings, artworks, religions and finally suggestions of human abilities and traits that may become extinct: thought, tears, wonder, love… Thus we were encouraged to reflect not only on our individual lives but humanity’s destiny and the future of our planet.

Near the end of the production there is suggestion of destruction — my interpretation was destruction of our world — everything that was pristine and white is blackened. Many of the performers disrobe on a darkened stage. There are piles of dirt. A burnt out car. When the performers are off stage, the floor is tilted, so that the dirt and debris slides forwards.

At the very end is another Gregorian chant, In Paradise, traditionally sung at the end of a Catholic funeral. And this is where there is hope, symbolised in the tiny baby left alone for a few minutes on stage. (Space Odyssey 2001 flashed through my mind.)

Elements of this enormous production were memorable and moving but, for me, I would have been happy to have listened to the beauty of the music (which was superbly performed throughout). Sometimes, I think the activities on stage detracted from music which by itself has a universal message. Even for those of us who do not subscribe to traditional religious belief, Mozart’s music alone can offer at least some hours of repose.

2 Comments to “An extraordinary Mozart Requiem”