A marathon is usually associated with running. It is believed that Pheidippides ran as a messenger from the Battle of Marathon to Athens to report victory over the Persians, and a marathon race has been included in the modern Olympic Games (since 1896). On Sunday 24th February, the people of Melbourne were able to sit through a complete day of concerts of Dvořák’s music — there was nothing exhausting or gruelling about the experience for this member of the audience. The day of music-making, described as the Dvořák Marathon, raised money and increased memberships of community radio station 3MBS https://3mbs.org.au/

For the past six years, 3MBS has held ‘Marathons’ — each year a different composer has been featured: Beethoven, Schubert, Mozart — in 2018 it was the Bach family. Performers donate their time. 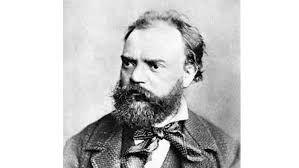 Czech composer, Antonin Dvořák (1841 – 1904) is well known for works such as his symphony From the New World and his ‘cello concerto. This whole day of concerts visited some of these favourites but also gave an opportunity to hear lesser known works such as the opening item, Dvořák’s Stabat Mater, which is a meditation on the anguish of Mary at the cross: ‘The grieving mother stood beside the cross, crying while her son was hanging’. This grief is all the more poignant when we learn that Dvořák wrote this work at the time of the death of his infant daughter Josefa. Within a year, two other of Dvořák’s children would die in infancy. The work was first performed in Prague in 1880. It was first performed in Melbourne in 1885 by the Royal Philharmonic Choir and Orchestra and indeed, this long-standing group gave the performance last Sunday  (presumably no members from the Australian premiere performance took part).

Much of Dvořák’s music is infused with elements of his Bohemian background — often what seem to be reminiscences rather than direct quotations of melodies. For example, the idea of ‘Dumky’, a diminutive of the term ‘duma’ — a lament of captive people, brooding and introspective. In the second concert of the day, Piano Trio No. 4 in E minor was performed (piano, violin and ‘cello). It is known as the ‘Dumky’ trio and the music critic Daniel Felsenfeld had said that the listener is taken to ‘some dizzying, heavy places to be able to be both brooding and yet somehow, through it all, a little lighthearted’. Most of the six movements move through changes in tempo, such as moderate slowness to playfulness.

I won’t describe every piece of music performed throughout the day — I was swept up by the mood of Slavonic dances, played in piano duet form. I hadn’t known that Dvořák  wrote organ music — preludes and fugues. These were performed and several showed a clear influence of Bach. 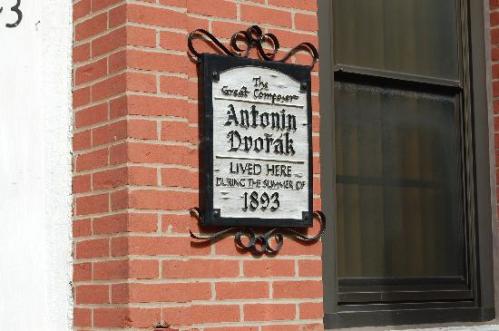 Dvořák was a professor at the Prague conservatory. In 1892 he moved to America for three years where he was director of the National Conservatory of Music in America, based in New York. Some of the music he wrote at this time is influenced by Negro sprituals. This is where he wrote his Symphony From the New World, his ‘cello concerto and the  popular ‘American’ string quartet (No. 12 in F major). This latter was written when on vacation in Iowa and when listening to it I realised that I was experiencing some of the most joyful music I have ever heard; a pure joy, no bitter sweetness, an expression that transcended personal griefs, such as the deaths of three children. At the time I thought that some of the rhythms in the faster movements derived from the regular hoof beats of  horses that may have carried the Dvořák family through the Iowa countryside, but I later learned that Dvořák  loved locomotives. Maybe it is the rhythm of a steam train. 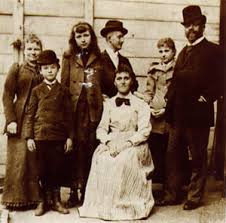 The Dvořák  family in America — Antonin Dvořák  on the far right 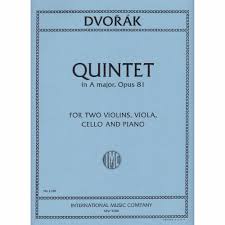 A sense of springtime and joy flows through the Piano Quintet No. 2 in A Major although this work incorporates elements of the Slavic dumky and Bohemian dance rhythms — it is thought to have been a reassessment by Dvořák of his first piano quintet, which he destroyed after its first performance. For me, a large part of the delight in listening to this work was the superb playing of Elizabeth Sellars and Wilma Smith (violins), Caroline Henbest (viola), Chris Howlett (‘cello) and in particular, Stephen McIntyre (piano). I doubt that I have ever heard more sensitive piano work — the piano melted into the strings and yet also stood out with the brilliant, crisp technique required for the Bohemian furiant and the frenetic energy and sharp swings of mood in the final movement.  It was a true quintet, not a piano accompanying four string instruments. 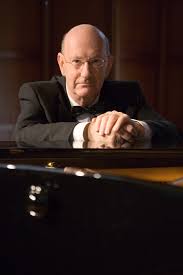 It was also a joy to hear young virtuoso Christian Li and Laurence Matheson perform the Sonatina for Violin and Piano in G Major. Li was born in 2007. He has already won the prestigious Junior First Prize at the 2018 Yehudi Menuhin Violin Competition in Geneva, 2018. Although a little older, Laurence Matheson has won a string of awards, including the Director’s Prize of the Australian National Academy of Music. Together they gave a beautiful performance of the Sonatina, which was first performed by Dvořák’s children. According to program notes, inspiration for part of the slow movement came to the composer when he was hiking at Minnehaha Falls in Minnesota. With no paper to hand, he scrawled the tune on his shirt cuff. 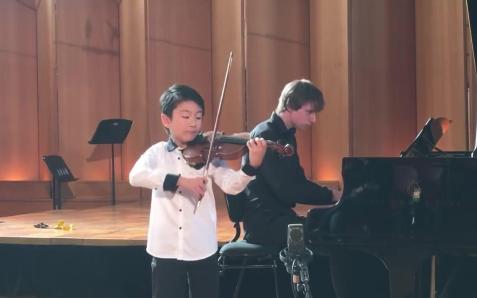 My final joy for the day was a performance of the Serenade for Wind Instruments, ‘Cello and Double Bass. This is one of my favourite pieces of chamber music — I like the tempering of the ‘wind band’ sound by the lower strings and also I have happy memories of playing this work myself many years ago, so I am intimately familiar with every note. It is a fairly early work, having been written in 1878 after hearing a performance of Mozart’s ‘Gran Partita’ Serenade. Is the imperious first movement a bit smug? We are swept away by dance movements and lilting melodies. A contrabassoon was included in this performace.  Dvořák made it an optional addition, because the huge instrument can be hard to come by. It certainly adds a fuller dimension to the bass line. Several days later, I still have this music running through my mind. 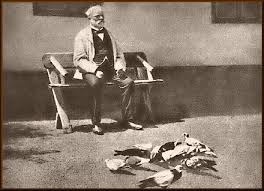