Dimanche has been described as a ‘family show’, but it is far more than that. I went away from the wordless performance of mime, puppetry, film and sound asking myself — why is this so much more powerful than seeing a movie? Maybe it is the lack of words. We are weary of clichés about climate change.

Dimanche was presented at the Adelaide Festival by two Belgian companies: Compagnie Chaliwaté and Cie Focus. One of the members said: ‘We want to speak about the denial in which we find ourselves, the mismatch between the extreme urgent need to act and our difficulty to assimilate this urgency’. They do this superbly well, juxtaposing scientists documenting the last living species on earth and a family trying to carry on with their usual life on a Sunday (Dimanche) against the odds of  extreme heat (the table legs melt), cyclonic winds and flooding tsunami.

Some brilliant puppetry: an almost life-size polar bear is separated from its cub when melting ice cracks.  An exotic bird seeking food for its chick is killed in the devastating winds (its remains are blown into the family’s home and they intend to feast on it). Apart from these poignant depictions of loss, a memorable piece of acting is when the three scientists are driving in polar regions in their van — simply done with a steering wheel, hand-operated windscreen-wipers (the actors take it in turns) all bouncing up and down in unison to suggest the rough terrain over which they’re driving.

There are underwater scenes too, with fish puppets. Articles we recognise from the family’s house are at the bottom of the ocean — a woman in a kayak (rowing in time with the sound of the water) ‘fishes’ up some items. But she too will be taken by the tsunami. 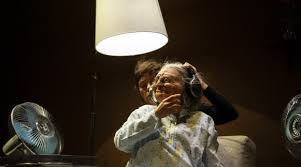 elderly mother puppet, whose feet are cooled in ice

I think it was the lack of words that made this so powerful.

This Shakespearean play was performed at the Adelaide Festival in German with English surtitles. The man who becomes king is the villain – deformed, from having been born prematurely. It is the time of the Wars of the Roses. And, to pay back the world for his deformity, Richard seethes with malevolence. He slaughters members of his family, including his two young nephews, so that he can become king. Henry, on the Lancastrian side, fights Richard for the throne at the Battle of Bosworth. The night before the battle, Richard is haunted by the ghosts of the people he has killed. He himself is killed in battle (‘My kingdom for a horse’) and Henry succeeds to the throne. The play is a study of the Machiavellian, psychopathic Richard. 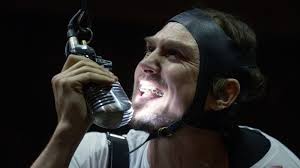 When one attends a Shakespearean play, it is as much to hear the poetry of the language as it is for the story. With this performance in German, it would seem that we were immediately at a disadvantage. But this was not the case. Lars Eidinger becomes Richard so completely that I hardly missed that poetry. Just as psychopathy and grasping ambition is timeless, so was this play. The set was suitably gruesome. An early scene is a kind of ominous disco party. Richard communicates his intent to the audience in a cryptic way, often by means of a pendulous microphone with camera attached. Early in the performance this device broke down. Eidinger seemed to almost relish the intrusion into the flow of the drama – while it was being repaired, he cracked a few jokes with the audience (in English), barely out of character. There was nudity. There was urinating on stage. There was an attempt to get the audience to repeat, like a jingle: ‘You look like shit. Have you eaten pussy today?’ Most didn’t respond, but apparently we were better than Berlin audiences. Later, I learned that this somewhat confronting question is Eidinger’s way of revering an actor or director (I’m not sure which), now dead, whom he greatly admired. In memory of this person, Eidinger insinuates the question into his performances. In some ways, the play being in German was useful – such asides, obviously not written by Shakespeare, were in English.

The whole play revolved around Lars Eidinger – Richard III, as it should have. The other actors were very good, but it is Eidinger’s performance that will stay with me. The final scene is particularly memorable. For a moment we see the dead king dangling from a meat hook, centre stage. Then all goes black. 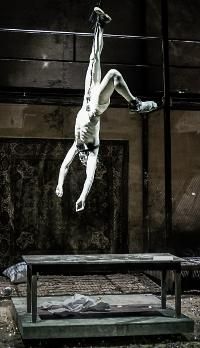 As a part of the Adelaide Festival, David Marr interviewed Lars Eidinger (whose English is excellent). I got the impression that there isn’t a large gulf between Eidinger off the stage and Eidinger on the stage. The interview was held on the Palais, a replica pleasure-boat on the Torrens River, disappointingly not very much like the original 1920s version. When Eidinger approached the stage and there was thunderous applause, he lurched to one side as though he were going to throw himself overboard.  Talking of acting, he said, ‘The fictional moment can have so much more reality than reality’, and he mentioned the importance of mirrors to Shakespeare – to look in the mirror is a truthful moment. How many of us have the courage to sit alone and stare at our image? For Eidinger on stage, communication with the audience is an essential – the collective consciousness in the theatre – Eidinger needs to access the energies of all members of the audience. 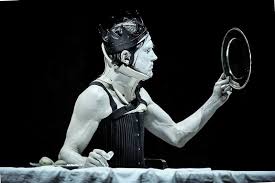 An inevitable question was, how does Shakespeare stand up to being performed in German? I was aware that some of the rhythm of the poetry had, inevitably, been lost, but the psychology, the drama of Richard III was most definitely present. Eidinger said that Shakespeare is so strong, you can never destroy it. But then he amazed me and moved me greatly by saying that he wished that the German language no longer existed. He was referring to Nazi Germany and the fact that Hitler was schooled in drama for declaiming his speeches. Eidinger, at the age of 41, still feels a responsibility for what his forebears did. It seems that he has no love for the German language.

Eidinger had referred a couple of times to the fact that we were a rather elderly audience. He said that back in Berlin his audiences are usually younger and female. I get the feeling, he said, that they are there for my body. But you, he said, are here for my brain. I was certainly there for his brain! This man, who said, ‘the reason for living is dying’, also has a sense of humour.

G.F. Handel composed many operas as well as oratorios.  Saul was composed as an oratorio at a time when opera was a little out of favour in London. An oratorio is a large-scale, usually narrative musical work for orchestra and voices, typically on a sacred theme, performed without costume, scenery, or action. Handel’s oratorio of Saul was first performed in 1739. It is a dramatic telling of the consequences of David’s victory over Goliath. Saul, king of Israel, is jealous of David’s success and plots to have him killed but Saul, unhinged by jealousy, and his sons are killed in battle and David ends up as a popular leader of the Israelites. Handel’s work is normally sung in concert style with choir, orchestra and soloists. In Handel’s time it was conducted from the harpsichord. This drama has been taken by Barrie Kosky and retold as an opera – the music and words seem to be unchanged, but the spectacle is magnificent. Pretty much the first thing we see on stage is the severed head of Goliath, then the curtain swings open to a vibrant banquet that for some reason reminded me of a Rubens painting – although the participants were clothed – the choir, actually on the tables that are overflowing with flowers, food (venison and swans) and the people themselves.

No staid chorus here, the colourfully dressed singers jumped off the tables and danced. The story has what are perhaps usual ingredients: victory, jealousy, triumph and happy young lovers (David ends up with Saul’s daughter). The music was interpreted in a light buoyant style using a full orchestra, but with none of the heavy stodginess that is sometimes the fate of baroque performance. As in Handel’s day, the conductor led from a claviorganum – a replica of an instrument used at the time. In the second part this instrument rose from centre stage, briefly reminiscent of old theatre organs. There were stark contrasts enhanced by the costume and scenery which, when jubilant was strikingly bright and colourful and when troubled, was stark black and white. The second part began stunningly with a stage covered by lit candles – for a while that was all you could see.

The leading men stood out in their black present-day style suits. When mad, Saul, who suckled the sagging breasts of a hermaphroditic witch to evoke the ghost of Samuel, was totally white. In the final scenes everyone was dressed in black and white.

One is tempted to say that in its presentation as an opera Saul came alive. But of course a traditionalist would say that the great music of Handel is alive anyway and doesn’t need enhancing. The music was totally respected. The Biblical story was interpreted in a way that would not be condoned by puritans. While, on the one hand, this production was completely faithful to the original, I nevertheless came away feeling that I had had a new, stupendous Felliniesque experience.

WRITINGS AND MUSINGS OF MARGARET MCCAFFREY
a rambling collective