A Melbourne-dweller, I visited Sydney – a family holiday – in 1960. My mother had worked there during the war and she enjoyed showing us around. We went to Coogee Beach on a tram and ate lunch at a Repin’s Coffee Lounge. So, I remember the Sydney of 1959, depicted fondly by Bruce Beresford in his recently released film, Ladies in Black. 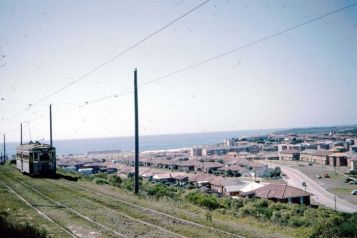 Lisa is 16 years-old, much the same age as I was on that 1960s holiday, and, having just finished school, she has a Christmas job at Goode’s department store, which is very similar to David Jones. In those days we didn’t have a David Jones store in Melbourne – everyone went to Myer’s or if you needed something really special, you went to Georges – mentioned disparagingly by some of the Goode’s ‘Ladies’; Melbourne/ Sydney rivalry was very strong in those days.

I mainly remember Georges for a make-up consultation I undertook with my friend Caroline in the school holidays when we were 16. Her complexion was analysed as peaches and cream, whereas mine was banana (the consultant clearly had no imagination!). Desolated, in rebellion I bought a face-powder called ‘dark Rachel’, which I plastered over my pale olive face.

shopping in David Jones in the 1960s

Ladies in Black can be seen as a coming-of-age story. Sixteen-year-old Lisa (brilliantly played by Angourie Rice) is very bright, but her father is strongly against a young woman going to university where one comes in contact with such despicable sorts as communists and libertarians. Lisa’s parents call her Lesley, which she doesn’t like because it is also a boy’s name. During the story, as she works in the dress department of Goode’s, she asserts her right to use ‘Lisa’, stops wearing her spectacles and becomes quite sociable in adult company. Much of this transformation is aided by Slovenian ‘reffo’, Magda, a potentially terrifying manager of Model Gowns. Magda sees that with her intelligence, a little make-up, the right clothes, Lisa can make something of herself. Through Magda, Lisa and her fellow worker Fay meet other European migrants, who are viewed as rather intriguing. ‘Do you speak English?’ Fay asks the young man who, in the end, will be her husband. 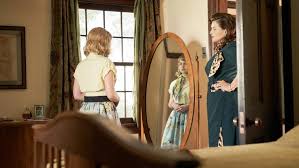 Magda helps Lisa to make something of herself

I remember learning in a similar way from an Italian ‘reffo’, Mrs Tosti, who ruled the typing pool at my father’s business where I worked in the school holidays. Mrs Tosti taught me how to eat spaghetti – real spaghetti, not the stuff you had on toast out of a can.

Most of us enjoy a nostalgia trip, but Ladies in Black is far more than that. It reminds us of the kind of Aussie mateship that prevailed in male company around the 6 o’clock swill (I think maybe by the 1960s New South Wales was a little more civilised, with 10 o’clock closing, and Victorians would cross the border to get an alcoholic drink after 6 pm.) Although all of us except the First Australians are migrants of some kind, the European refugees who settled here after the war were ‘reffos’; foreigners who ate strange food like salami and olives, and who were, it seemed, a little more relaxed in mixed company.

I had read Madeleine St John’s book, Women in Black, some years ago. When I came out of the movie, I felt a little flat. I had thought that there was more drama about Lisa going to university (she gets excellent Leaving results) and between Patty and her husband Frank who seems so daunted after ultimately having such a passionate time in bed with his wife (they have been married some years) that he leaves home in a kind of shock and returns weeks later. I had remembered their relationship as being more fraught – but I was wrong.

The film follows the book faithfully. I re-read it after seeing the movie. Most of the dialogue is straight out of the novel. The only exception is that, when Patty visits a doctor because, after all this time, she hasn’t conceived, in the movie the doctor talks of ‘relations’, whereas in the book it is ‘intercourse’ – a term used widely even amongst early 1960s school-girls. I’m not sure why the prudish euphemism was used, but maybe it was felt that the cataclysmic changes in attitudes to sex that have taken place since 1959 needed to be emphasised.

Madeleine St John was a part of Bruce Beresford’s group at Sydney University. She died some years ago of emphysema and related illness. Beresford says in his introduction to the recent Text edition of the book (2018): ‘I certainly underestimated Madeleine St John in our student days … It was only when I read Women in Black … that I became aware of Madeleine’s powers of observation, her understanding of character, the insights behind her wit, her rather unexpected warmth …’ The film that Beresford has made is utterly faithful to the book and a warm and fitting tribute to a writer who died far too young.

Lisa ready to face the world of university