My partner and I are in Paris right now. How thrilling to wake up on a Saturday morning, throw open the window of our 5th floor apartment and hear everyone puttering down Boulevard St Germain on their motor scooters. Each morning we observe that the lights of the penthouse opposite come on at 7 am: hard-working early risers, or, more likely I think, just returning home from the evening’s activities? 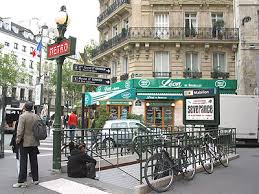 I don’t want to be a tourist, dashing from one ‘attraction’ to another. I just want to be in Paris. So, we wander. We buy cheese and sausage from a street market. We look through an open door to a courtyard, it seems to be okay to go in, we find that it’s the Delacroix Museum – a small museum set up in his house that he purchased to be close to the church of St Sulpice, where he had been commissioned to paint murals. Several rooms and the artist’s studio display a changing collection of Delacroix’s works and a few that were dedicated to him. 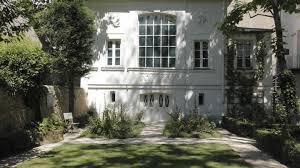 On Sunday we strolled down Boulevard St Germain to the Museum of the Middle Ages – a bonus that it is free entrance on Sundays. I had no idea that it is so extensive. In fact, for me the collection was overwhelming. Most of the artefacts from the 8th to the 16th century are astonishingly well preserved; some were discovered as recently as 1977. 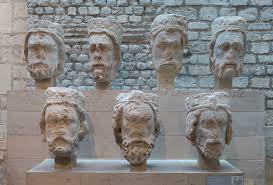 There are statues, stained glass windows, carved panels, magnificently bejewelled crucifixes and containers for relics. What I particularly like are the tapestries. How long would they take to make? I imagine the poor women bending over the stitches, losing their eyesight, devoted to their creation. Perhaps the most famous of these tapestries is a series showing a lady, a lion and a unicorn. There are six pieces – five illustrating the five senses; smell, touch, feel, taste and hearing. The sixth, Mon seul désir, is mysterious. Behind the lady is a partly open tent – what does it symbolise? Some believe it represents Plato’s theory of knowledge acquired through the senses. Another view is that the heart is an internal sense, making it possible to centre oneself.

Exhausted, we stumbled out of the museum and found, almost opposite, a cinema. In an hour’s time the 1999 Miloš Forman film Man on the Moon would be playing. An extraordinary contrast to the medieval world we had been in, but that’s what happens in Paris. The film is a biography of the comic entertainer Andy Kaufman, played by Jim Carrey. His style reminded me a lot of Jerry Lewis. Hoots of laughter until the end, where we learn (if we didn’t know) that Kaufman died of a rare form of lung cancer. He desperately wanted to keep living and tried a sham cure in the Philippines, but nothing could save him, except . . . a year after his death, Bob Zmuda, Kaufman’s co-worker, appears on a show as Kaufman’s created horror character Tony Clifton, singing ‘I will survive’.

After the film we kept wandering: crêpes au citron, then later, Chablis at the Odette bar, looking out to Notre Dame and then a concert of piano music rather incongruous for its setting; Chopin and Gershwin in one of Paris’s oldest churches, St Julien le Pauvre.