I came across this book at this year’s Adelaide Writers’ Festival (see reviews on elwoodwriters.com    ). British writer Alan Hollinghurst was a guest. I had heard of him: The Swimming Pool Library came out in the 1980s when there was heightened interest in gay culture because of the AIDS ‘epidemic’, then, in 2004, he won the Man Booker prize with The Line of Beauty. But I hadn’t read these books. After hearing Hollinghurst speak, I was keen to read The Sparsholt Affair. 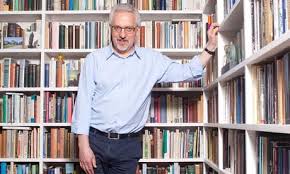 The book is broken into five sections and on one level it can be seen as an intergenerational narrative: in part 1 we see David Sparsholt as a young man briefly at Oxford during World War II – muscular and beautiful, lusted after by clandestine watchers in the black-out. He has a girl-friend and gets into trouble for having her in his room out of hours. In Part 2, David has a teenage son, a bit dyslexic, but good at drawing and just becoming aware of his gay desires. By Part 3 (1970s) the son, Jonathan, is a young art restorer finding out about the delights of living in London and, with his divine looks, asked by a lesbian couple to father their child. By Part 4, Jonathan, an established portrait artist, has a daughter, and some of this part is narrated from her point of view. Jonathan hasn’t married – he has fathered the lesbians’ child and clearly loves Lucy whom he sees regularly. In Part 5, Lucy is old enough to be married – a huge society wedding quite at odds with Jonathan’s style, and father/ grandfather David dies at the age of 89.

The most compelling feature of this novel, however, is not finding out how the different generations turned out; the reader has to piece together exactly what happened in the 1960s – the much publicised Sparsholt Affair. In Part 1 we observe that David Sparsholt, although keen to marry his girl-friend, is not averse to the amorous advances of a man. By the 1960s he is well respected, a decorated airman and businessman. We gradually learn that the ‘affair’ involved gay sex and a parliamentarian. It occurred at the time just before gay sex was decriminalised. After conviction and damning publicity, David Sparsholt left his wife, who was Jonathan’s mother (the girl-friend of Oxford days) and married his secretary. But all this we must piece together; the affair lurks in the background just as it does for Jonathan, who is aware that people befriend him in the hope that they may hear more about his father’s involvement in the celebrated scandal. Even when he is a successful artist, Jonathan cannot escape being David Sparsholt’s son. But the reader learns all of this gradually, third hand. The narrative of the novel is conveyed from various points of view:  firstly a memoir piece written by Freddie, a contemporary of David Sparsholt at Oxford. Much of the narrative is from the point of view of Jonathan, and Jonathan and his gay artistic world is also observed from the point of view of daughter, Lucy. David Sparsholt is first observed through a window at Oxford, exercising his enticingly beautiful body. And that is really how we continue to see him: the rather distant, but very proper war hero,  a father who drives a Jensen, who on one of the rare occasions he meets up with his adult son, dines at his club. When, at the end, Jonathan views his dead father’s body, he, the observant artist, can’t remember the colour of his father’s eyes.

What carried me through this book – effortlessly – was not the intriguing plot, but Hollinghurst’s vivid descriptions of people and places. The section below is from Part 1, a darkened Oxford in wartime blackout. Evert and Peter are looking up at David Sparsholt’s window:

He (Evert who would later have an affair with Sparsholt) and Peter (an artist who would sketch Sparsholt in the nude, not showing his head, so he couldn’t be identified) stood staring up at the room opposite. Their backs were expressive, Peter smaller, hair thick and temperamental, in the patched tweed jacket which always gave off dim chemical odours of the studio; Evert neat and hesitant, a strictly raised boy in an unusually good suit who seemed to gaze at pleasure as at the far bank of a river. p.6

Part 2, a scene at the beach. Adolescent Johnny aware he is gay:

The young man was changing, Johnny a second too late as he pulled up his pants with a snap and stood wringing the wet from the tiny green trunks. Johnny could be so absorbed in looking he forgot he was visible, and being looked at. ‘All right?’ said the man – a clench of shame for Johnny, but it was just pleasantness, unsuspecting. The dog ran over, and Johnny scratched its head with sudden rough energy and relief. p. 142

From Part 4, Lucy (Jonathan’s daughter, the product of a lesbian relationship) is the only child at a wake:

A little later Lucy went and stood near Grandpa George, who was in a corner of the crowded room with a tall white-haired man – she knew he hated people barging in when he was talking. After  a minute, though, the older man nodded pleasantly at her and said, ‘And this must be your granddaughter, George?’

He looked down to check. ‘Yes … yes, it is’ – with a momentary smile at her as if confirming he hadn’t lost his car keys. p.355

In Part 5, 60 year-old Jonathan goes to a gay nightclub – something he hasn’t done for many years, but his partner died a few months ago. The casual abandon of the music and dancing provides a precursor to Jonathan’s new world of freedom: his father dies that night :

Now a dark-haired young man was pressed against him, saying something in his ear, and they moved hand in hand into the dancing crowd, the young man stepping back to protect a space for them and make a cute little act of dancing with Johnny – he thought for a moment he was teasing him. He was lean and large-eyed, with a long nose, and a smile which only faded as he lost himself in his trance, then came back as he looked at Johnny, and hugged up close with him as they danced. p. 425

Filed Under: My Reading
Tags: Alan Hollinghurst : The Sparsholt Affair

2 Comments to “THE SPARSHOLT AFFAIR”

Possibilities of connections and a sense of belonging.